THE DRCS CLINIC FOR DOGS AND CATS

Since April 1999, thanks for DRCS, there has been a vet on Koh Samui to help all stray, injured and sick dogs and cats. This was only achieved with the help of animal friends as the basic equipment and running expenses for a clinic are very high. Dr Somsak and two helpers were employed by the DRCS in April 1999.

Dr Somsak worked for the DRCS until the end of 1999. In January 2000 he opened his own practice in Chaweng. In March 2000, we employed Dr Sarawoot and Dr Boy but they wanted to pursue more independent work and I was not unhappy when they quit in September 2000. From October 2000 until June 2003, all stray and ill dogs were taken to Dr Somsak. We had to pay the same price for treatments as everyone else on the island. This was a good idea at the time as we only paid for actual work carried out on the dogs and were spared the overheads of the full-time salary of a vet. Dr Somsak spayed two dogs and many cats every day for us and we had a good working relationship with him. Dr Somsak sold us the medication and vaccines at a good price and explained to us in great detail about the different illnesses and provided good advice on the treatment of our animals. DRCS has always paid for the castration and medication for the Thai people who could not afford it.

In April 2003, we finished work on the shelter at Baan Taling Ngam with its own operating room. It made sense, therefore, to employ a full-time vet again so full use could be made of our new facilities. Of course we first needed to provide shelter places/boxes for the operated dogs before employing a new vet.

All dogs and cats stay at least one week at the DRCS shelter for medical treatment after being spayed/castrated.

Many animal welfare groups in Thailand and other parts of the World throw the animals back out to the street after one day. This means for many of them a slow and painful death! Dogs and cats are unaware that they will die for sure if they remove their stitches themselves.

For more Info about vets, please see: Our vets and staff

Since the 8. November 2005, Dr. Sith (Teesith Pengvithaya) works for us. We are very pleased with his work and hope that he will stay with the DRCS for a long time.

To control the breeding of dogs and the population on the island, Dr Sith spays every day at least 5 dogs or cats for the DRCS.

One pair of dogs will produce 16 puppies in one year, and if these also have offspring, the number rises to more than 500 puppies over three years. The Humane Society of the United States (HSUS) estimates that a pair of breeding cats and their offspring can exponentially produce over 400,000 cats in 7 years. The street dogs in Thailand are called Soi Dogs. The name comes from soi = street.

With your help we can continue the daily spaying and neutering of dogs and cats on Samui! 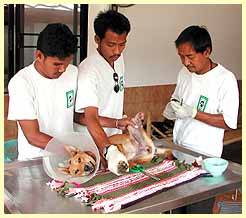 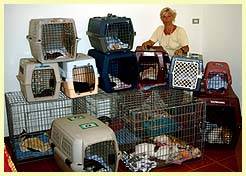 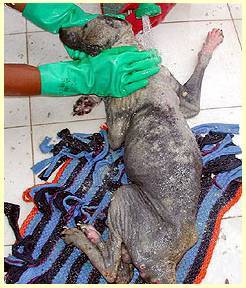