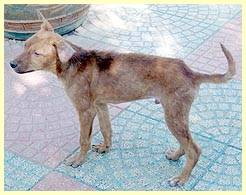 I was brought in by three tourists who befriended me in Maenam. I had really bad mange, had lots of ticks and fleas, and was really thin. They had tried to feed me but I was very shy around them and other animals. Because they were going home, they brought me to the shelter where Don immediately bathed me in Amitraz to get rid of my mange and gave me lots of injections to make me a big, strong dog. I've settled down at the shelter and am no longer shy with any of the visitors or the other dogs.

Great news: I have found a new home on Koh Samui.

While I was living at the shelter, Jannet and Lars from Denmark were looking after me. Thank you very much.